I performed for four years at the Ohio Renaissance Festival from 1994 to 1997, but my first day in costume and in character was Opening Day 1993. I was a patron, and dressed in my costume from the Northern California Pleasure Faire, I took on my role as an itinerant teacher. My outfit looked roughly like this: 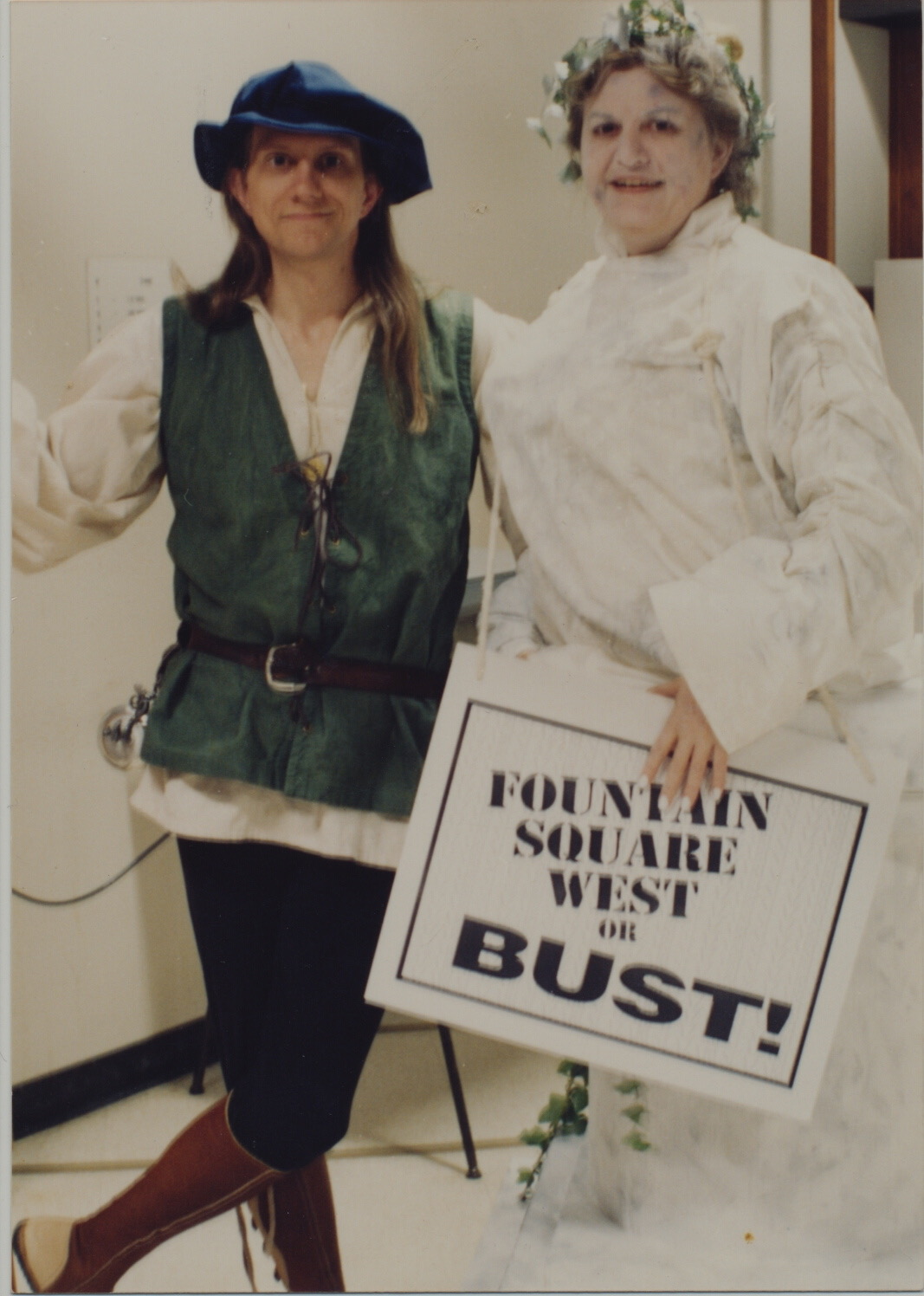 This is me in my peasant garb as it looked during a Halloween costume contest at my place of work in 1993. The winner was the woman on the left, who was dressed as a statue from the Fountain Square district of downtown Cincinnati, Ohio. The company was making noises about moving the operation there from it’s historical location, and did so a couple of years later. I took second place with pieces from my peasant garb and other items that I had purchased over the years I was at the Northern California Pleasure Faire.

But I had worn the outfit a couple of months earlier on opening day, when I joined the first group of patrons who entered the Festival after the opening gate ceremony. As I proceeded past the gate, I looked around a bit and decided to turn to the right and follow the path in an anti-clockwise direction.

Before I reached the edge of the gate plaza I was accosted by a tall, lanky young man with curly brown hair in peasant garb and a plaque around his neck. He introduced himself as the Queen’s guide, and after a bit of conversation revealed the opposite side of his plaque, which identified him as the Village Liar. He was quite a facile liar at that, and I conversed with him using the style of Festival English I learned at the NorCal Faire, and after a few minutes, went on my way.

A year later the same young man would accost me at the auditions, asking me why I looked so familiar to him. I explained how we met on opening day the previous year, and he immediately remembered that moment. The young man is Steven Townshend, who continued performing with me throughout my tenure and beyond.

I knew that being dressed and in character could create some confusion among the patrons, so I specifically avoided performing in any overt manner. I also made discreet attempts to avoid being engaged by the actual performers, so that they could entertain the other patrons without wasting their time on me. For the rest of that day, and the other days I attended that season, I mostly watched various shows, browsed about and played games, and acted as an ornament to various shops during the course of the day.

At first, I was also concerned that I would be a distraction to the shop’s customers, and I made a point of asking the shopkeeper if it was acceptable for me to stand at their shop and greet patrons as they passed. Without exception the sellers were happy to have me there, as I attracted more attention to their shops than might otherwise be the case. I at times even went so far as to encourage patrons to examine the seller’s wares.

My day then became one of chatting with patrons and playing to their small children, telling them a bit of my story and trying to provoke a smile when I could. I was asked by teenaged girls more than once if I would kiss their hands, but I demurred. Instead, I recommended they seek out Sir Francis Drake, who was played by the far more handsome Jon Grilli, and made a point to send them where he would be.

My other purpose to being at the Festival those days was to evaluate for myself if it would be worth my time to take part as a regular performer. I watched the cast and the various skits they performed as well as random improvs that took place while I was nearby. I came to the conclusion that this would be an exciting and memorable activity for me, and once the festival was over, took note of the means to audition next year and set a reminder to do so.